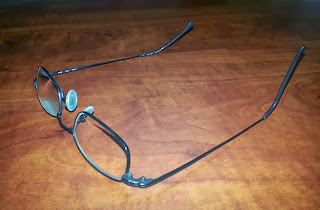 Answered prayers take on many forms, and every one of them speaks to the love of the sovereign God who is on our side.  Today God's love and sovereignty showed up as an answered prayer in the form of a pair of glasses and a credit card company mistake.

A couple of months ago, I got a slightly changed new prescription for my glasses.  The lenses I had were terribly scratched last February during my trip to India & Nepal.  But I'd worn them with scratches ever since to save money.  And I didn't fill my new prescription after I got it for the same reason.  But then roughly three weeks ago I lost my glasses.  As soon as I realized it, I looked everywhere for them, and thoroughly, but I couldn't find them.  I still had my prescription sunglasses, and I managed as best I could for the last 3 weeks with only my shades (So if you saw some crazy guy in a white SUV driving somewhere in Kershaw county SC at night while wearing shades, now you know he wasn't drunk or high).  But over the last few days, I was starting to get headaches and achy eyes, so I realized I just couldn't wait anymore.  I had to bite the bullet and go get new glasses.

Because my prescription had recently changed some, I also needed lenses for my shades.  So by the time the lady added up one pair of new frames and lenses for 2 pairs of eyeglasses, the total came to over $350!!  Though we make it a point not to carry a balance on credit cards, all I could do was put it on a card and pay it off over the next couple of months.  So I selected a card I use regularly but pay off the balance in order to get vacation points from the purchases.  Although the lady who helped me tried to run the card several times, it inexplicably wouldn't work.  Eventually she set my order aside on my promise that my wife would be in later that day to pay for the new frames and lenses with another card that would work.

As I walked out of the store, I called my wife to tell her she'd have to come by to pay for my glasses for me.  We both remarked how this was a large expense we didn't need right now due to some other recent unplanned and unavoidable expenses.  She asked me, "Are you sure you checked everywhere?", to which I answered, "Yes, thoroughly."  She also mentioned that the credit card company had contacted her as I was attempting to pay for the glasses, to ask her if we were trying to make a $357 purchase.  She would have to call them back to find out why it wasn't going through.
They later informed her that the card wouldn't go through because the security code printed on the card was not ours "according to their records".  Keep in mind that this was the very same security code that had always been printed on the card and which we had used multiple times including within the last 48 hours!

As I got to my car and hung up the call with my wife, I decided it couldn't hurt to check the car once more for my lost glasses.  As Lisa hung up the call with me, she decided to pray and ask God to help us with this unexpected expense.  I looked under the seat, then I looked in the gap between my seat and the console.  As I knelt beside the car to look under the seat again one last time, I caught a reflection just behind the seat, not under it.  THERE THEY WERE!!!

God had answered Lisa's prayer!  But even more than that, God had made sure just minutes earlier that I didn't purchase eyeglass frames that I didn't need.  For a few critical moments, at just the perfect time, a credit card, which had always worked, suddenly didn't--just long enough for God to reveal what I needed--just long enough for God to reveal that He was involved and in control.

Lisa called the card company and they fixed the "problem".  I found glasses to wear till my new lenses (no new frames needed!) come in (so no more headaches).  And I spent nearly $100 less on glasses than I would have had to spend had I not found the glasses!

A good friend recently asked me, "How can you be so sure about God?  Do you ever struggle to believe?"  I told her that I often have questions, that I often deal with things I don't quite understand. I did today when the lady at the optical shop read me a total that was $100 more than I expected.  I thought, "Lord, why now?"  But I also told her that although I have questions and doubts, I don't doubt that He is, that He is good, and that He is in control.  I often doubt my own understanding of Him.  I sometimes question whether I have misunderstood His Word and Him as a result.  But I don't doubt Him.

"Why do you not doubt God?", you may ask.  There were at least 10,000 reasons before today.  But reason 10,001 is that today I saw Him through glasses I couldn't find, frames I couldn't afford, and a credit card that wouldn't work...each of them a part of a gracious and timely answer to prayer from the God who both "exists and...rewards those who seek Him" (Hebrews 11:6 ESV)