Everyone Wants a Plan B 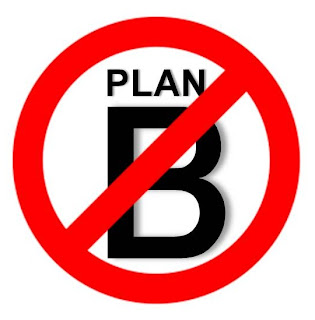 Sooner or later, if we haven’t already, we will all find ourselves facing some challenging but undeniable directive that leaves us anxious, afraid, maybe even disappointed and looking for another option--any other option. It could be when you have a friend who is far from God but you're afraid to share your faith with them. It could be when you see that person who needs help but you want a more convenient option. It could be when you are asked to compromise your morals by fudging that report at work and you know you shouldn't do it. It could be when your marriage is on the rocks and you are tired of the strife and are tempted to give up and move on to something else, something easier. It’s not our desire for a plan B that is so faithless. It’s not our asking God for an easier alternative or even our looking for one that sets us apart from great men and women of character, our heroes of the faith. Everyone wants a “Plan B” at some point--EVERYONE.

Let’s start with Abraham, the father of the faithful. When commanded by God to take his promised son to the top of Mount Moriah and sacrifice him there, he hopes out loud for a plan B in response to Isaac’s question of where is the lamb for sacrifice: "God will provide for himself the lamb for a burnt offering, my son" (Genesis 22:8). God provided a plan B for Abraham, the ram caught in the thicket. Whew!

Abraham of course had other moments when he was not so faithful to plan A, creating his own plan B or going along with someone else’s. There were the two times that he lied about Sarah being no more than his sister rather than trusting God to protect him. And of course there was the time that he went along with Sarah’s impatient plan B to generate an heir by letting him sleep with Hagar, her handmaid. It was in these moments that he looked more like a spiritual midget than a hero of the faith. Too many of us identify with this part of Abraham’s life rather than the Abraham of Mount Moriah.

Everyone wants a Plan B--even Jesus. Satan offered Jesus multiple versions of Plan B when he tempted Him. The Bible tells us “he was tempted in all things as we, yet without sin”. It’s one thing to be tempted by some Plan B; it’s another thing entirely to choose it.

On the night he was betrayed, Jesus prayed in the garden at Gethsemane: “My Father, if it be possible, let this cup pass from me; nevertheless, not as I will, but as you will" (Matthew 26:39). Faced with all the sins of the world being placed on Him as the sacrificial Lamb of God, all the righteous wrath of God being poured out on Him because of our sins, separating Him from the Father for the first time in all of eternity, he shuddered in fear and he sweat blood in anguish. He asked His Father for a Plan B. There was none to be had. AND HE DID NOT TRY TO CREATE ONE. He denied Himself and just a few hours later took up His cross, despising its shame, and following through with Plan A, he secured our redemption. As David Platt puts it in his book, Radical:

“At the Cross, Christ drank the full cup of the wrath of God, and when he had downed the last drop, he turned the cup over and cried out, ‘It is finished.’”

Jesus gave us our Plan A: “If anyone would come after me, let him deny himself and take up his cross and follow me. For whoever would save his life will lose it, but whoever loses his life for my sake and the gospel’s will save it” (Mark 8:34-35). Not only has Jesus not offered us a Plan B, He has made it clear that there isn't one: “Whoever does not bear his own cross and come after me cannot be my disciple” (Luke 14:27).

Everyone wants a Plan B--that’s normal, human, expected. It’s only when we create or choose an alternative to God’s plan when he offers none that we step outside the footsteps of Christ. It is then that we are excluded from being useful to Him and from experiencing His best for our lives. Plan A = deny myself, take up my cross, and follow Jesus. There is no room for compromise, ever. There is no plan B.

Email ThisBlogThis!Share to TwitterShare to FacebookShare to Pinterest
Labels: Discipleship, No Compromise, No Plan B